Banrock Station wetlands get a boost 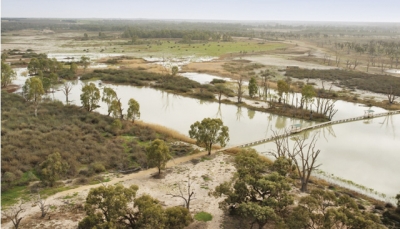 Nearly 700 hectares of wetlands at Banrock Station are being artificially flooded. This is the first time in five years the area near Kingston-onMurray, has seen flooding.

Banrock Station, in the South Australian Riverland, is on the Ramsar list of internationally significant wetlands.

A new regulator is pumping 2.4 gigalitres of water into the wetlands, a task which will take the next year.

Wetlands manager Christophe Tourenq said the process should mimic the natural wet-dry cycles of the flood plain, boosting the health of native plants and wildlife in the area.

Christophe said they had high water levels all spring and after that water levels would be reduced a little bit during summer.

“After that, again high levels next winter and then we start again to have a dry wetland in two years time.”

He said the process would recreate what happened before the  construction of locks and weirs along the Murray River.