Spoonbills at Boggy Pond and surrounds 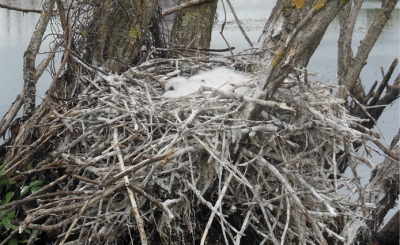 The photo is of spoonbill chicks in a nest early this year. The nest itself is a pretty loose affair of sticks placed in the base of a dead willow tree and surrounded by open water on all sides. As the chicks age the nest becomes a lot whiter, the result of droppings from both the chicks and their parents.

This was the first record of spoonbills nesting at Boggy Pond and only the second for Wairarapa.

They have been seen more often in the wider area over the past few years with the increased area of shallow wetland created by DU’s Wairio restoration project likely to be providing a good reliable food source.

I think, also, that the predator control in the area has been a big part of supporting these nests once they start and giving the youngsters a decent chance of fledging.

We hope that this is the first of many!

Earlier in the year a team took the canoe to  chase and spray purple loosestrife.

On the way out we noted a big flock of  spoonbills at the northern end of the lagoon and on the way back we came across some nests in the bases of sprayed willows.

We didn’t approach too closely, but through the telephoto it looked like two chicks at least in each.

It was quite a shock to come across these, a  pleasant one too, as you’d imagine. This is the  second confirmed nesting site at Wairarapa Moana.

We plan to follow up the loosestrife work and will check on these chicks and have a look over a wider area to see if there are more.

I think this is a result of the combination  of willow spraying opening up the lagoon  and creating the right conditions for nest  building and the pest control keeping the nests alive instead of providing food for hungry mammals.