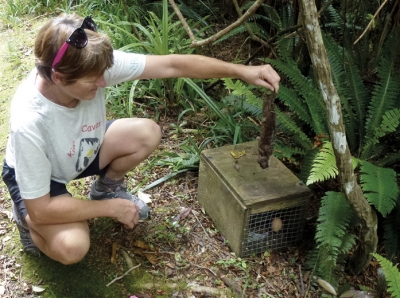 The Ruahine Whio Protection Trust (RWPT) is a registered charity formed in late 2014 and functions though the efforts of a small group enthusiastically lead by chairwoman Janet Wilson. Its purpose is to raise funds to help protect and raise the number of Whio in the Ruahines and surrounds.

Janet has tramped for years in the Ruahines as a member of the Palmerston North Tramping and Mountaineering Club (PNTMC), and whio are often spotted on the river. Although being a protector of whio was not Janet’s original ambition, she took the opportunity to become a protector of the whio living and trying to survive in the area. Janet took over the running of the Oroua Valley Blue Duck Protection project from the NZDA (Manawatu Branch) in 2011. This expanded in to the Pohangina River in 2012.

“Life hasn’t been the same since,” said Janet. Trapping began in the Ruahines in 2007.  Several groups now look after approx 1800 predator traps, predominantly DOC 200’s. These range from the Aorangi–Awarua Trust’s lands in the North to the Pohangina River in the South. In 2015 a Ruahine Whio Management Plan was developed by these groups with support from DOC, and along with the RWPT, they now make up what is known as the Ruahine Whio Protectors Collective.

Janet still coordinates the Oroua and Pohangina projects. Between July 2015 and June 2016, 110 stoats and weasels were caught, as well as 450 rats. She has a good team of willing volunteers but is always keen to hear from experienced trampers and hunters who might like to help out the whio. For many a tramp in the bush is no longer just a Sunday outing. It has become an ongoing war against the stoats, weasels, rats, and any other likely whio enemy.

Whio are the most endangered bird in the Manawatu and Janet is keen to raise the profile of our $10 duck locally. Janet said the Oroua and Pohangina rivers have the most southern population in the North Island. There are no known whio in the in the Tararua and Rimutaka ranges.